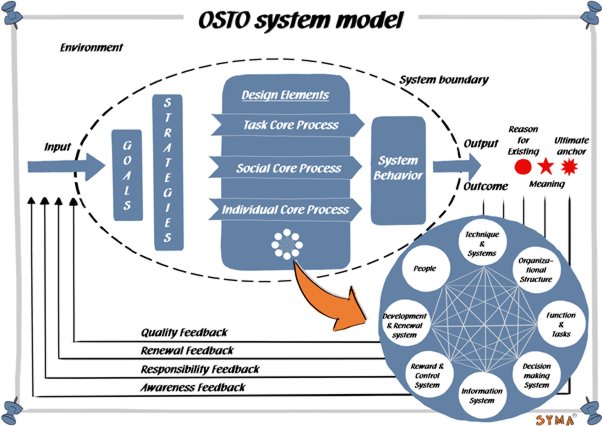 „Each organisation is perfectly designed to get the results it get’s!”
Davis. P. Hanna
www.davidphanna.com

The OSTO system model describes how within an organisation, information from the environment, from the reason for existence, and from outputs/outcomes is transformed into real results through transformation processes.
We got to know the OSTO approach in 1984 through Heijo Rieckmann and Holger Krug (both at Procter@Gamble at that time). They had developed a training seminar from the original approaches of David P. Hanna – the predecessor of today’s SYMA . In the following years we – together with Hejo – have further developed the model. At the end of the eighties, many training seminars at the VW Group prompted us to incorporate the reason for the model’s existence and its origins into the model and to scientifically validate the design elements (Siegfried Marks, 1991).

The strength of the OSTO system model is based on the networked consideration of the internal processes of an organisation, which consist of three core processes: Everything that goes in the desired direction are core processes. To optimize these means:

According to the OSTO systems approach, there are four steps to changing an organization:

The growing demand in the market then led to the foundation of OSTO Systemberatung by Renate, today’s umlaut transformation GmbH. Parallel to this, Klaus has supervised more than 40 dissertations (PhD Theses) in his work at the RWTH Aachen University, in which the OSTO approach was further developed and applied in various fields.
For us it has become the essential orientation map to better understand and control complex and dynamic organizations.